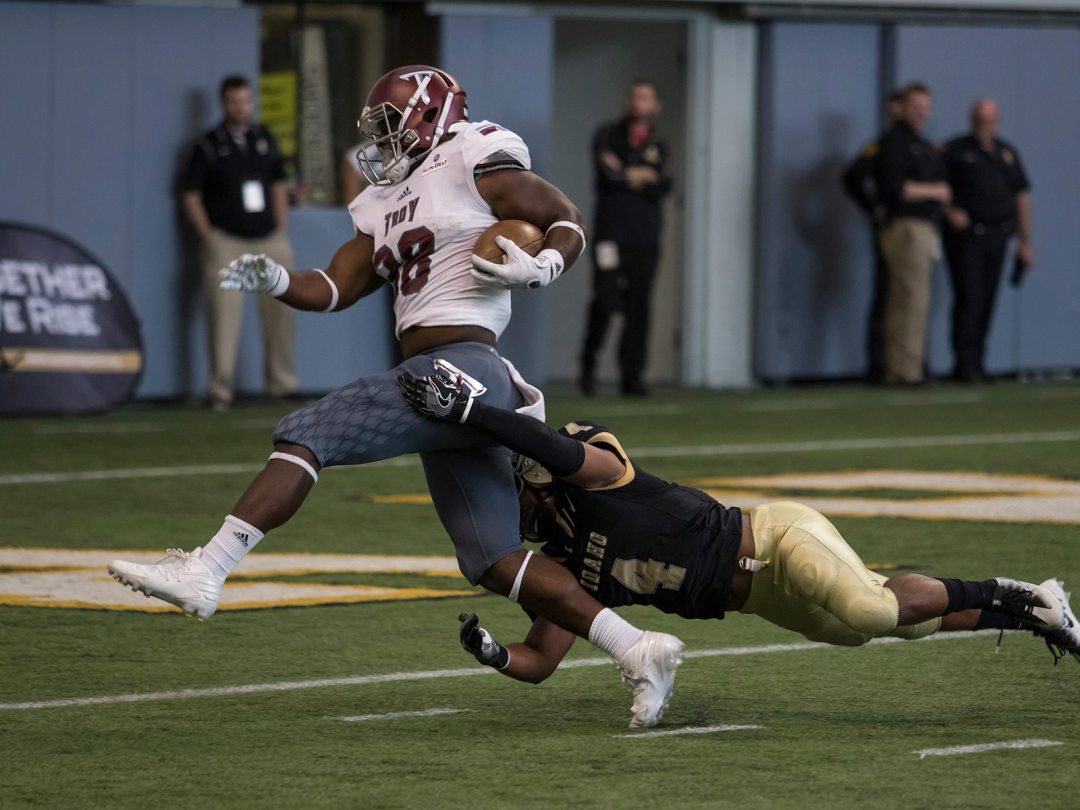 Let’s get this out of the way now: Troy is really good. Really fucking good. The Trojans were unequivocally the better football team on Saturday and it wasn’t even close. It wasn’t ever close, even when Idaho inched its way to a 6-0 lead early in the game.

There’s evidence to support Troy has been this good all season.

Consider further evidence: Troy is ranked No. 63 in the country in S&P+, which ranks teams based on five factors which correlate with high probability of victory. That is second best in the Sun Belt, and ahead of Pac-12 schools such as Arizona and Arizona State.

We lost to a real good football team! What’s new?

Rationally, I can brush off this loss and point to the remaining schedule while pointing out there are at least six very winnable games left on the schedule. That’s true! There are!

Here is what worries me.

I wrote one fucking week ago about how this is different. About how when we were punched in the mouth, we responded. We wouldn’t get down and let adversity kill our belief we could win a football game.

We went up 6-0, and then were quickly down 14-6 and then the game was over. Still only down two possessions entering the third quarter, we let a quick-strike touchdown to open the half completely kill us off with 29 minutes still left in the game.

I bet a sportswriter I really respect a beer on the UNLV game because he thought Idaho always quit when the going gets tough. I was beyond gleeful when we appeared to prove him thoroughly wrong.

Maybe that’s not even a thing. Maybe football players laugh when they read shit like this (they probably do).

So let me point to another thing that worries me … The offense is not very good right now.

The offense has been the strength of this program since Paul Petrino took over as coach. Petrino developed Idaho’s offense into the 21st most efficient unit the country last year based on S&P+’s efficiency model.

This model says an offense is efficient if it gains 50 percent on first down, 70 percent on second down and 100 percent on third down. Idaho accomplished this 46.1 percent of the time last season.

Currently, the Vandals are doing this at a 39.3 percent clip.

Maybe this is because of three games against top 63 teams in the country? Not really. Idaho had a 39 percent success rate against Montana State and 42 percent against UNLV.

Point to the passing game. Idaho has dropped from 61st to 91st in the nation in passing success rate.

Idaho’s passing game is predicated on quick-strike short throws and supplementing the running game with high-percentage first down passes. Linehan’s inexplicable lack of accuracy has continually put Idaho behind schedule in moving the chains, as has the offensive line failing to improve on last year’s progressions. Linehan was sacked four times against Troy.

Granted, Linehan has made up for some of this with his legs and clutch drives, but it cannot continue like this if Idaho is going to win the number of toss-up games it has left on the schedule.

We have to finish drives. Idaho is currently averaging 3.4 points per trip inside the 40, which is good for bottom six in the nation.

Imagine if Idaho didn’t fumble on the goal line at Washington and was 7-7 with the Huskies in the first quarter. Would it make a difference in the game? No. Does it make a statement of confidence? Yeah.

Imagine if Idaho’s methodical, successful drive to open the Troy game ends with six. The one drive in which Idaho’s offense looked like it had all of last season ended with a chip shot field goal. Then, after a turnover, another field goal. Imagine, the ensuing 14-6 Troy lead with the Trojans completely in control would feel a lot different than 14-14 would have.

Last year, Idaho averaged 4.7 points per trip inside the 40.

For as much as the offense has regressed, the defense has actually made modest improvements from last season. The defense meets the national average in allowing explosive plays, is slightly better at limiting opponent points inside the 40 and is slightly better at putting teams behind schedule in efficiency. It’s not much, but certainly would be good enough to get Idaho to the postseason should the offense recreate the performance it did last season.

Is the loss of Elijhaa Penny that devastating? The bruising running back was never explosive, but always a sure thing running behind a good run-blocking offensive line. Aaron Duckworth has not provided the same stability. The Vandals have dropped to 92nd from 69nd in the country rushing S&P+.

Receivers can’t catch the football. Deon Watson hauled in four of the nine targets his way on Saturday. This from your senior receiver/tight end?

At this rate, Idaho isn’t going to win six games. Underachieving is synonymous with adversity. If we can address this adversity, then we will go bowling.