Jeff Tingey thinks Idaho State is academically as good as U of I, is dumb

Meet Jeff Tingey. Jeff is is athletic director at Idaho State University. He has a little bit of a history with remarks about the University of Idaho.

He was hired in March 2008 and two weeks later lost women’s basketball coach Jon Newlee to the University of Idaho.

It was an upgrade in every way for Jon and, three NCAA Tournament appearances later, he doesn’t regret it.

The last appearance was courtesy of a 67-55 win over Idaho State in the Big Sky Tournament finals. 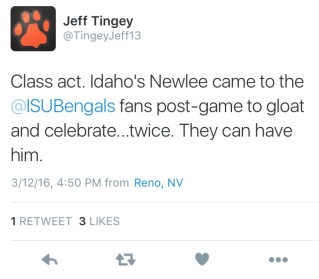 Tingey clapped back at Jon Newlee’s taunting of Idaho State fans after the game on Twitter, which is what mature leaders do these days.

What Tingey didn’t realize at the time is the Bengals fans are the ones who, in Pocatello and Reno, were taunting Newlee and his players for no reason. Maybe because he decided to upgrade by taking a job at the University of Idaho?

So it comes as a real surprise that Jeff Tingey wants to inconspicuously name-drop the University of Idaho again. This time in an article where he is defending himself and his institution against a group of boosters withholding $80,000 in fundraising from Idaho State until Tingey gets shit-canned.

Jeff Tingey thinks Idaho State has the same academic standards as the University of Idaho.

Okay, in Tingey’s defense he is just responding to a bunch of delusional Idaho State fans who think their alma mater is the best in the Big Sky. But, this does address an issue that Tingey is surely worried about now that Idaho will be a full-fledged member of the conference in 2018.

Tingey was likely against Idaho joining, although Idaho State had little to no pull in that decision. The Montana and Montana States of the world are very happy to have Idaho back in the fold. As is the commissioner.

So, Tingey has to start the public relations battle now.

Allow me to fact check that, though.

Clearly he is comparing athletic admissions standards or baseline admission standards for any student.

Any state of Idaho resident with a 2.5 GPA will be granted automatic admission into both universities. This is because of the state’s dangerously low rate of high school graduates going to college, most of them outside of the greater Boise area.

Athletically speaking both universities will grant athletes admission with the lowest possible academic requirements. Most FBS and FCS schools will do this for student-athletes, with schools like Stanford being the few exceptions.

So this is what Tingey will point to, even though this differs insignificantly from the rest of the Big Sky.

But if we’re being really real, The Idaho State University does not compare in any way to Idaho.

The admission rate of Idaho is around 70 percent on most of those websites, while Idaho State was pegged between 80 to 90 percent by the last website.

Then we have research and development dollars. This unequivocally rates Idaho at the top of the state.

The National Science Foundation tracks research expenditures around the country.

Research and development expenditures in 2015:

The University of Idaho literally, LITERALLY, lit-er-a-lllyyyy, spent twice as much money on research as Boise State and Idaho State COMBINED. That was also the case in 2014.

The University of Idaho graduates 53 percent of its students over a six-year period. Nearly a quarter of them graduate in four years, per the Chronicle of Higher Education.

Idaho State is at 30 and 11 percent respectively.

Granted, Idaho State is a somewhat of a commuter school while U of I is a residential campus.

I’ve also made it a personal commitment of mine to never have to go to Pocatello, so here’s to hoping the 2018 game between the two is in Moscow.

Here’s to a renewed in-state rivalry with an inferior academic institution.

One response to “Jeff Tingey thinks Idaho State is academically as good as U of I, is dumb”