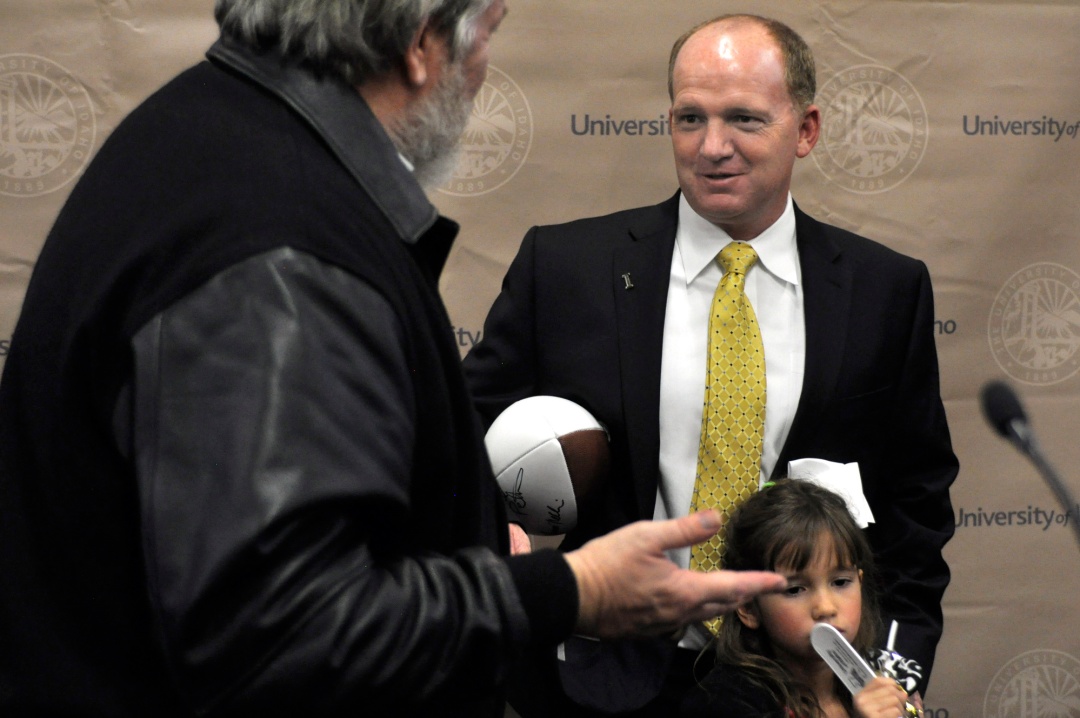 Idaho football 2016: Meet in the middle

Paul Petrino loves coach’s kids. He loves himself, really, because he was a coach’s kid. But it turns out he likes to recruit them too.

All three of his quarterbacks are coach’s kids. One of them happens to be his own kid!

Matt Linehan is why Idaho is going to be a good team in 2016.

To be fair to Scott, his career was riddled with injuries and he still threw for over 7,000 yards and led Idaho to the playoffs in a less pass-happy time in college football.

Then you have Matt.

From his freshman season Linehan upped his Yards per Attempt (7.6 from 6.7), completion percentage (63.4 from 58.5) and cut down on his interceptions (11 from 18). A handful of those interceptions weren’t his fault, occurring because of receivers errors or opportunistic defenders on well-thrown deep balls, or happening in garbage time.

If you say even eight of those picks were his fault, then Linehan is throwing an interception every 48 attempts.

Per this Pro Football Focus chart, Linehan was top 10 in the country last season in adjusted completion percentage on deep passes, tossing six of his 11 picks on such passes. He also put half of them where they needed to be. That’s huge, considering this offense needs to become explosive in order for this unit to take the next step.

The offense couldn’t be in better hands with Matt Linehan. But Saturday’s scrimmage gave us a glimpse of what it could look like without the third-year starter. To put it bluntly, that view isn’t nearly as pretty.

Options behind Linehan are Gunnar Amos and Mason Petrino. Neither have been hit yet by a college football player in a competitive match of tackle college throwball yet. I wrote about other options here.

Matt Linehan also has a ton of receivers to throw to

Paul Petrino’s bias is all over this roster. Of course, this team’s strength is in its passing game. Of course, the individual who spent nearly a decade coaching wide receivers now has a roster legitimately seven-deep at receiver.

In other practice reports on the Trib, Notorious Thee I.G. notes the following:

Ungerer’s consistency is the most intriguing to me. Last season he bulked up in anticipation of playing outside receiver so Dezmon Epps could play in the slot. He worked on breaking off the press and using his hands. At 185 pounds, if Ungerer could occupy the outside, I imagine it would mean Petrino could do so many things with Callen Hightower’s speed in the slot.

Onunwor as a deep threat is also huge with Buck Cowan and Deon Watson at tight end. Cowan constantly shredded defenses over the middle with seam routes. Watson can also kill defenses split out wide and running intermediate routes.

The biggest thing here is depth. Idaho was decimated with receiver absences last year, from Ungerer and Jacob Sannon getting hurt to Epps being dismissed from the program. Players like Hunter, Frysinger and Jante Boston will give Idaho the depth to deal with injuries.

But who is going to run the ball?

Fuck if I know. There is little to no depth here.

Aaron Duckworth returns as Idaho’s most explosive runner with Isaiah Saunders behind him. Both have been banged up this fall.

Explosiveness doesn’t exist here. Unless, Denzal Brantley returns from injury and does the things I saw him do last fall camp. At one point I thought he could push Penny for carries until he suffered a foot injury and had to redshirt.

Where is Dylan Thigpen in this picture?

The line ranked No. 36 in the nation in Adjusted Line Yards created and No. 63 in the country in sack rate. It returns four starters and adds a couple of guys who could supplant said starters.

But will we be able to stop anybody on defense?

Mike Breske was canned from Washington State because he couldn’t develop a defense good enough to keep up with one of the nation’s most prolific passing offenses all the way to the point where he never finished with a winning record at Washington State.

Mike Breske coached a defense at Idaho last season that couldn’t keep up with one of the Sun Belt’s best offenses, to the point where Idaho did not finish with a winning record.

I’m really too lazy to pull up advanced statistics because I don’t need them. There is no hidden story here. Idaho was just bad. We didn’t make plays, we gave up big plays. It was hard for me not to laugh in the press box when Appalachian State’s back-up running back ran for 200 yards.

Idaho isn’t completely devoid of talent on defense. Idaho has never been completely devoid of talent. Maxx Forde, Quinton Bradley, Quayshawne Buckley, Marc Millan have all been exceptional defensive players just in the Paul Petrino era. Kaden Elliss was ranked by Pro Football Focus as one of the best freshmen in the country. Tueni Lupeamanu provides good speed for his size on the defensive line.

The problem, likely, has been depth and scheme. Idaho had next to zero depth in the secondary last year and couldn’t handle it when dismissals and injuries devastated the unit. The defensive line, in turn, couldn’t deal with a loss to a player like Ryan Edwards.

Now we see if the program having 85 scholarship players for the first (and probably only) time in Petrino’s tenure will create enough depth to field a competent enough defense for the Vandals to win the six shootouts necessary to play in a bowl game.

That’s all we’re asking of the defense. Meet the offense in the middle. Even modest improvement of the defense could be the difference between 4 wins and 7 wins, if we’re just going off of how last season played out.

We have the coach to do it

I can’t sit here and praise how great of a football coach Paul Petrino is without also pointing out he has a penchant for being a dick.

I’ve been around Petrino long enough in a professional setting to have this opinion. I wasn’t present for the incident you’re all thinking of, though I’ve had my own run ins with Petrino and him not being pleased with things I wrote or asked about.

This honestly isn’t something that’s unique to him in the college football world. I’ve heard plenty of stories of how certain coaches treat the media, players and recruits.

I can say Idaho players speaking to me off the record, including graduated players, speak of Petrino positively, even glowingly. At least from the guys who’ve stuck around long enough to participate in the program’s progress.

It’d be remiss of me to ignore his efforts to be personable with me and other media members. He says hi to me at prep events I’ve covered and makes small talk. He doesn’t have to, but it means something to me he puts forth the effort.

If we acknowledge his flaws, which many other college football coaches also possess, then we can also acknowledge he’s a great football coach. We have to acknowledge just getting this program in position to compete for a bowl is an accomplishment for any coach. If Robb Akey ‘won the Humanitarian Bowl with Nick Holt’s players,’ Petrino will do it with his own incredible recruiting effort.

Worst facilities in the Sun Belt. Came into a situation with zero conference stability. Came to an area of the country not exactly ideal for recruiting.

And while his six-figure salary is all of the gratitude he needs or even deserves, he still has mine for the amount of time and commitment he’s put into turning this thing around.

One thought on “Idaho football 2016: Meet in the middle”