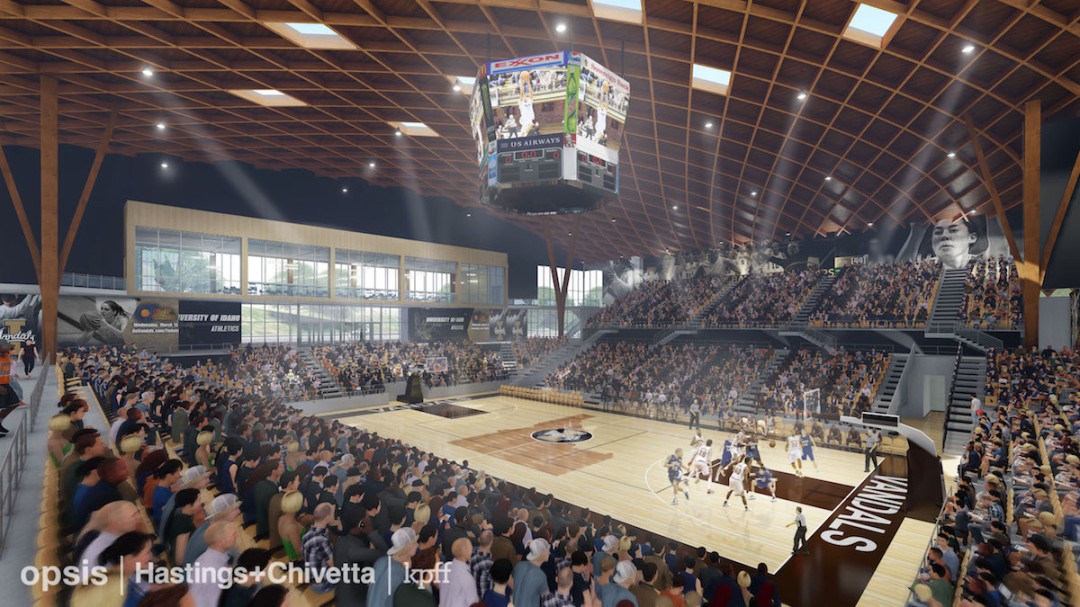 The University of Idaho on Thursday, led by president Chuck Staben and athletic director Rob Spear, announced a $10 Million gift from Idaho Central Credit Union toward the Idaho Arena project for naming rights.

The money will be paid upfront to go toward construction cost of the now Idaho Central Credit Union Arena, hopefully slated for construction of the 4,200-seat multi-use venue by next year and a debut in 2021.

ICCU CEO Kent Oram was on hand with a giant ceremonial check to commemorate the event. He noted ICCU was initially interested in naming the court, but that the Bud Ford family already had dibs.

The donation brings the total fundraising amount to $34 Million of an estimated $45 Million budget, larger than the initial $30 Million number floated out over two years ago when fundraising quietly began.

What would a fundraising press conference be without a photo of a big check? pic.twitter.com/If7zQ1Lfwk

The deal came together over the last six weeks, a source close to the situation told Tubs at the Club.

Discussions didn’t start getting serious until after Thanksgiving and a hard agreement materialized on December 15.

The timing could be described as lucky for both parties, but makes perfect sense as ICCU plans an ambitious expansion into north Idaho. The credit union currently only has three branches within a two-hour drive of the university.

The Idaho Forest Group will also be making a substantial contribution of materials, which fundraisers hope account for up to an $8 Million value to further close the remaining $11 Million gap in fundraising.

The timing of the contribution comes at a critical time before public fundraising gets announced. Per the source, “99 percent” of top donors identified by the university have already pledged or declined giving.

The hope is ICCU’s important and substantial contribution Thursday could start changing hearts during the larger public phase of the campaign.

There will be additional naming opportunities for the arena, including fan areas of the building, coaching offices, practice courts and more. Spear also alluded to a “brick-by-brick” naming idea for the average Joe fan such as yourself.

Any intelligent fundraising campaign would also have an online arm for the broke people such as myself who would like to donate our $25 of beer money to something greater than ourselves.