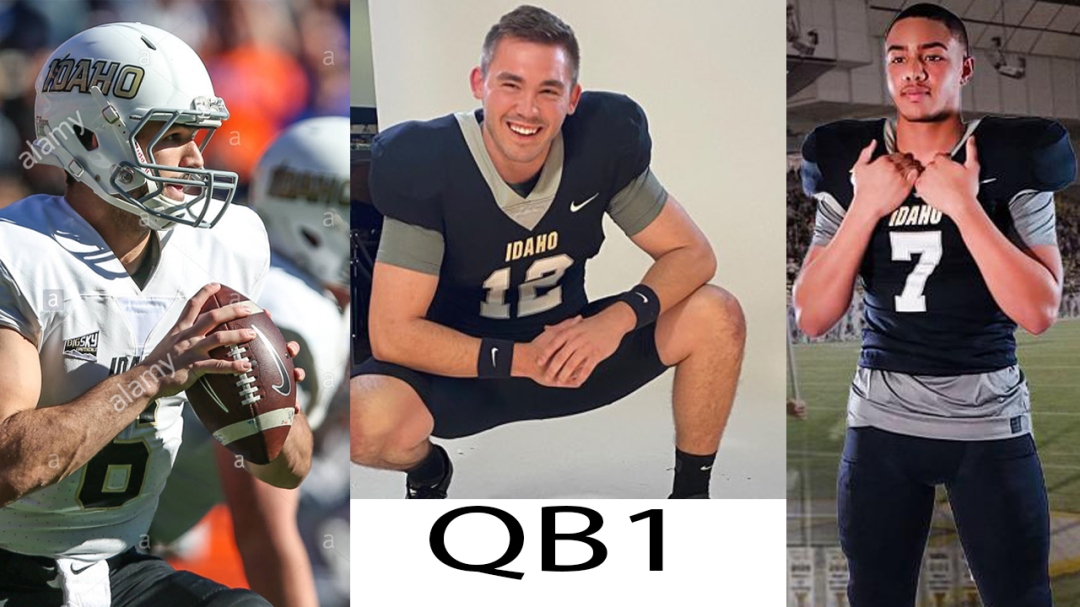 What To Know About Quarterbacks In June

For the third consecutive year Idaho has a QB Competition coming into fall camp. With the recent announcement broke by Colton Clark of the Lewiston Tribune, that Lewiston’s Colton Richardson will not be returning to the team this fall. The competition now seems even more open than before.

With Colton out, Idaho will carry five”ish” quarterbacks into fall camp. I would also not be surprised to see a late addition added to bolster some depth via the transfer portal.

Mike has spent his collegiate career bouncing around a few times, Idaho will be his 3rd stop.  The early indications were it was going to be Mike or Colton behind center in 2020. With Colton out it appears Mike is the leader in the clubhouse to take over the reins.

Being a senior expect him to be an important voice in the locker room. Not being able to work with the team in spring could make the comradery slower to develop.

Mike knows what it takes to step in and compete. He took Western Florida to the D2 National title game as a sophomore. He has the big game experience which should play well into the trend of Idaho last season . Who seemed to show up for all the big games.

He is coming in as a grad transfer from UConn who plays in the American Athletic Conference (AAC) which is widely regarded as the top group of five conference in the FBS. He won the starting job at UConn before suffering an injury early in the season that led to more of a dual QB system after.

He seems to be exactly what Idaho will need in 2020. A leader who can step in on a young offense with some experience and help them take the next step forward. Helping coach and push both Nayar & Jordan to be at even higher level come 2021.

After national signing day in February it looked like Nayar may have been a victim of the added depth Idaho has assembled in past two seasons, and would have been a long shot to start. Not necessarily based on talent, but based on getting reps. Between a returning redshirt junior, high profile true freshman and a FBS grad transfer, snaps would have been hard to get. With Colton no longer on the roster you would image Nikhil will be the beneficiary of most of those snaps.

In a year where Spring and Summer ball has been nonexistent it gives him a major leg up as this is his 3rd year in system where the others have only had playbook for a few months. They also have not had opportunity to practice with the team where Nayar has.

Nayar is the sleeper pick to win the job. He has the Skills, Size and IQ. If he puts it together don’t be surprised if he blows this competition out of the water.

Maybe the most hyped QB to join Idaho since Dominique Blackman, will have a lot of weight on his shoulder and maybe unfair expectations. To some he is already being viewed as the savior of Vandal football. Jordan was considered by Hero Sports to be the #2 QB prospect in the FCS. The 3 star out of Vancouver Washington (Greater Portland Area) had offers to many FBS schools including some in the power five such as Louisville. He is worthy of the hype. Idaho should be tactical with this decision. Throwing him to the wolves may not be the best idea, especially with a shortened off-season.

A major believe is if CJ had not suffered a season ending meniscus tear during his senior season. He would be playing for a Pac 12 or Big 12 type of school. The talent is there. If you follow CJ on Twitter, he has been working his tail off to get back on the field stronger than ever. Just because he can play, doesn’t necessarily mean he should.

With a Grad transfer appearing to be the favorite, it means Idaho will likely have a 4th straight year of competition coming in 2021. Giving Jordan a year to continue to rehab, learn the playbook, get in the weight room with coach Scharnhorst and build those relationships with his teammates.

Don’t forget with current NCAA rules he is allowed to play in 4 games during 2020 season and still be a redshirt freshman in 2021. In 2021 we would also have returning weapons Haywood, Hatten, Lee, Carter, Romano and others we will learn about this year.

This all being said, if he shows up and is the clear-cut favorite. You start him. After all he is a coaches kid, and Coach Petrino loves coaches kids.

A guy who has gone a bit under the radar. Coming into fall camp Cisco looks to have fallen into the position I had originally pegged Nayar in Being a victim of our depth. Cisco is young and is still learning the offense. 2019’s competition saw Richardson and Petrino receive the majority of the snaps with Nayar getting some snaps here and there. Expect Cisco to take that role in 2020.

It may be a hard year for Cisco and will test his mental fortitude. As unfortunately I do not think 2020 will be the year for him.

I have little doubt he will takes snaps in a live game in his future. But to happen in 2020 he would need to have taken a large leap forward in the off-season or injury issues.

Good news for Cisco is he is young and has years left in his career. His first 2 seasons will not define his career.

A fan favorite in Moscow Carter will have a lot of people pulling for him. The last time we took a player whose dad had quite the name recognition in Moscow at the Quarterback position it worked out alright. Like Carter Friesz, Matt Linehan was under recruited for football but Idaho gave them a chance. Matt took that opportunity and never looked back.

Could Carter do the same?

Former Washington player of the year arrived on campus with some expectations on his shoulders. He has since disappeared to many casual fans. The hardcore fans know he has received a greyshirt, redshirt and a position move to the other side of the ball.

Given his Judo background it appear to make sense that he would be tasked with taking people to the ground, instead of avoiding it.

That being said he did appear in a post by QB coach Charlie Molnar over the spring in a Zoom Meeting with the other QBs. He may get a run at QB this fall. His high school production lends you to believe he could take the reins and do something special with them.

But until we get confirmation, he will be running with the QBs full time this fall, it is easier to see him running some scout team or special packages, than a true starter.

This is how I view the competition and its competitors as we come into July. By September 4th Cisco could be starting and Borisch backing him up. Nobody really knows until we get these men back in pads and see how they look at full speed.

One thing is for sure, Vandal fans should be thrilled with the level of talent it appears this QB room has from top to bottom. That will only improve more in 2021 as Colton Richardson returns along with everyone else on this list not named Beaudry.

Going to be a promising next couple of years.